When you first meet Andrea, you can’t help but notice her warm personality, welcoming smile and striking features. It is only after you speak with her that you realize she seems wise beyond her years, and you begin to understand why.

Andrea gets a loving squeeze from husband, Wayne. Andrea was diagnosed with breast cancer at age 25.

“It was a highly aggressive cancer affecting my left breast and 18 lymph nodes,” she says. “I was given a very poor five-year survival rate with a 90-95% chance the cancer would recur in less than five years.”

As a young woman and mother, the diagnosis came as a shock. “I didn’t know if I would see my son go to kindergarten, much less graduate from high school,” she reflects.

Although the odds were stacked against her, after a lumpectomy, chemotherapy and radiation therapy, Andrea’s cancer was in remission.

“I first noticed some swelling under my left arm that came and went for the summer. I worked in a Gynecologist’s office at the time and he examined me and thought it was probably just an after effect from previous conventional radiation that I’d had. When my left breast started to swell up and become red, I knew something was wrong.”

This prompted Andrea to see a local surgeon who ordered an ultrasound and biopsy. When the initial biopsy results came back positive for cancer, Andrea was crushed.

“The doctor said he was sorry but the results were positive for a cancer recurrence. He asked me what I wanted to do. I told him that I wanted both breasts removed immediately.”

A few days later, Andrea had a double mastectomy.

“I know a lot of women have a hard time with the loss of both breasts, but for me there was never any sadness involved. I mean, how do you mourn the loss of what I felt was a total betrayal? When the cancer recurred, I honestly felt like my body had let me down….once again.”

Final biopsy results revealed that Andrea was dealing with another aggressive form of recurring breast cancer, known as “inflammatory” breast cancer, that affected her entire left breast. Andrea was again facing a poor prognosis, “I was so distraught and robotic,” she says honestly.

On top of that, she had already been treated with radiation once before and there was a concern that she might not be able to receive treatment again due to a possibility of already receiving her maximum radiation dose. “There are sensitive structures all around the breast, like the heart that can only be exposed to so much radiation,” says Andrea. “I went to see a medical oncologist and he told me that he thought I had already maxed out on radiation. He asked me to give him three days to consult with a radiation oncologist. At that point, I didn’t even feel like I had three days.”

Andrea pushed for other options.

“It’s important not to accept one answer. Regardless if we’re talking about a pain in your chest, a cold or cancer, we have choices and we don’t have to settle for the physician who is most convenient or someone we have gone to all our lives. I don’t understand, because we’ll shop around for things that are so trivial in life. We’ll go to 15 furniture stores to pay less for a couch, but we don’t do that with our healthcare.”

He led her to Cancer Treatment Centers of America (CTCA) after calling their care line and learning about the TomoTherapy® System radiation treatments. Andrea also realized that getting the best treatment would involve some travel since she lives in Michigan. The closest TomoTherapy treatment center, at the time, was Midwestern Regional CTCA in Zion, Illinois.

At Andrea’s first CTCA meeting, she immediately felt at ease because the doctors were open and honest. “Dr. Dennis Citrin, a CTCA-Midwestern medical oncologist, told me, ‘It will be a rough road, but if you’re willing to fight, we’re willing to fight for you.’”

Andrea’s family enjoy quality time together. Dr. Bernard Eden, director of radiation oncology at CTCA-Midwestern, led her radiation therapy regimen. He says TomoTherapy radiation treatments were well-suited for Andrea since she had experienced previous radiation. “TomoTherapy is a good option for breast cancer patients who previously reached their maximum radiation dosage or need to spare underlying lung and heart tissue,” explains Dr. Eden. “It spreads out the dosage from 360 degrees around the tumor, and can thereby minimize dose to surrounding normal tissue. Plus, by taking a daily CT just before each treatment, we are able to be more accurate.”

He adds, “Inflammatory breast cancer is very aggressive and not too common. Without radiation treatment, there is a high risk of recurrence, which is why TomoTherapy was recommended.”

Andrea’s re-treatment was as aggressive as the cancer.

“We began with a hyperfractioned course of radiation two times a day for three weeks to decrease the late effects of radiation like lung damage and fibrosis,” says Dr. Eden.

In addition to radiation, Andrea received chemotherapy and was supported with naturopathic medicine to help alleviate side effects associated with treatment.

Andrea reflects, “The first time I was diagnosed with breast cancer, I felt like daily treatments were a constant reminder of the cancer and they mentally set me back. When I was at CTCA receiving TomoTherapy treatments, I started to see another side. I focused on relationships I was making with other patients and staff. I came to see my treatments as a daily effort towards my wellness.” After pausing a moment she continues, “When I had my radiation treatments the first time it was negative and I was so resentful. I hated the daily reminder. But the second time, I didn’t feel that way. I think it had so much to do with the atmosphere at CTCA. It’s a hard place to feel sorry for yourself.”

In total, she was away from her family for the month of December 2004. She tolerated the radiation well.

“I was blessed because I never ended up with any major side effects. I never had any blistering. Other than being a little fatigued, I would not have known I was receiving treatment.”

She says that even her family was impressed when she came home for Christmas break. “My sisters picked me up at the airport and they were so amazed at how good I looked,” she laughs. “I think I looked better than I did when I left.”

Andrea is almost three years out from the second recurrence and continues with follow-ups every six months. “I just had a major check up in August and it was the best one yet,” Andrea says with obvious relief. “The doctors were very pleased. It was so nice to come home without any unanswered questions.”

Andrea is currently on a leave from her job as a medical assistant, but plans to go back. In the meantime, she enjoys spending family time with her husband Wayne, 9-year-old daughter Hannah and 16-year-old son Josh. “My kids are both involved in sports so we’re running all the time. We don’t get a lot of downtime around here!”

She says they enjoy cheering on the Detroit Tigers, fishing and off-roading on the trails of their wooded backyard.

And, she makes sure to save some time for her friends.

Andrea leads the way for some four-wheel fun. “I just went on a girls tubing trip down the Au Sable River in Michigan. We called it our ‘Girls Gone Wild’ trip,” she laughs.

While Andrea does find time to enjoy life, she knows that she has to take care of herself and encourages other cancer patients with a wisdom that only someone who has experienced cancer twice could have. “You have to be positive, but don’t try to be Wonder Woman,” she says. “I feel like I often didn’t give myself enough downtime and that is really important to just take it easy on yourself sometimes. Also, understand that you’re going to have weeks where you feel so completely normal and others where you struggle emotionally. For me, the emotional aspects of cancer were much more of a challenge than any physical changes I had to endure.”

Andrea continues to do her part to help other cancer patients by hosting a support group in her home. She says it does get difficult because the reality of cancer has caused her to lose some close friends, but she remains optimistic about the future, “I try really hard not to skip a beat in my life. And, I tell everyone that TomoTherapy made a difference for me. I believe I am here today in part because of TomoTherapy.”

Menu
Who we are
Resources

Find a Facility Near You
Products

Industry-leading service to support your ongoing success, from speedy install and optimization, to proactive monitoring and unrivalled on-site service, to smart upgrade paths to keep your system at the leading edge. 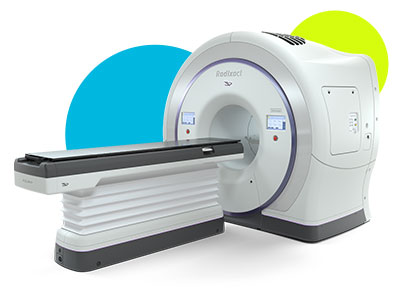 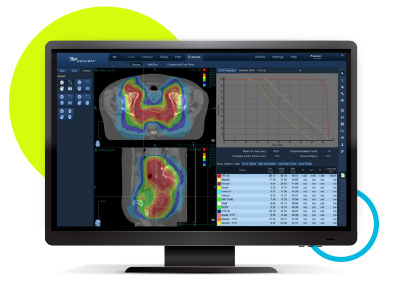 Redefining the future of cancer care

The following pages explore some of the many ways clinicians around the globe use Accuray technologies to deliver unique and effective treatments for a wide range of clinical indications.

Accuray is expanding radiation therapy: our products can deliver it accurately, precisely and effectively, from oncology to neuro-radiosurgery and beyond.